It’s hard to find the words to describe the incongruent beauty of this place.

The first word that comes to our mind when thinking of Varanasi is FILTH, and it is true. But Varanasi is also ancient history (3000 years?), it is life and it is death (actually, a lot of this). It is misery and it is joy. It is cows and dogs, rats and goats, monkeys and humans. It is Ganges at its holiest and its utterly disgusting. It is the light of the sun at dawn and the warmth of the Aarti candles at dusk. It is the lie of the tourism and the truth of pure belief. The madness and frenzy of life and the patience and calmness of existance. It is the kites flying higher an higher towards the clouds in the afternoon. It is all this and more… and filth.

You find shit all over the place. Cow shit, dog shit, goat shit… human shit? I don’t know, this one is harder to differenciate… Fresh, dry, stinky, sticky, there is so much it has grown like an organic skin, a protection to the stonefloor and, like any skin, it regenarates regularly, if you know what I mean! It can be frustrating as you walk trying to avoid them but it is defenitely not the worst. Human rubbish is just disgusting. Loads of plastic bags, bottles, packages, together with waste food, paper and whatever one can imagine accumulates on the streets for “living rubbish bins” (that’s dogs, rats and cows) to deal with them. More often will you see trolleys to collect animal shit that rubbish, but that’s normal, as it can be sold afterwards and used to heat, to fertilise, etc. However this is nothing new and by now we are kind of used to.

So, as I said, the arrival was a bit overwhelming (we even took out the knife to feel safer). The train took 3 hours more than expected (total success for a 28-hours expected journey)  and we got our first surprise. The narrow allies are so small, it is impossible for rickshaws or taxis to get to the old town. Yuhuuu…??… Maybe, but the day we arrived we were not so happy about it. Having to wander in this town at 22h30 not knowing where you have to go can be claustrophobic.

The dimmed lights bring the walls even closer; the cables hang from everywhere; groups of dancing people parade their deads on their way to the ghats (the stairs at the riverside) for their cremation; the people you come across stare at you with empty expressions (why are they looking then!?)  and the shop porters push their bicycles full of merchandise. I really don’t know how they turn the corners with such huge trolleys but often you must jump into a shop or a house to allow enough space to pass… because YOU are blocking the way… All of this and of course the shit.

By the time we reached the hotel, the reservation was cancelled. But the guide from the hotel Alka, gently took us to another branch called Treeth hotel. Following him through the little roads was even scarier and we thought someone would jump on us at any minute. But like everytime before, we got there and nothing happened. We got a “survival” room for the night (a room with artificial light and small windows that allowed only the smoke of cigarettes in) at an overpriced 650 IRP. It’s too late to discuss, lets go to sleep and see tomorrow… And eventually we stayed there! The day after we changed to a better, wider and cleaner room on 3rd floor with views to an inner working patio for 50 IRP more. The options at Alka (it is a very popular destination, right next to the river, with big patio, restaurant with views and many rooms, but I think it is getting a bit pricy) could not compare and the service here was great!

With accommodation sorted, we could concentrate in enjoying the city, the many veggie-friendly places, the laidback atmosphere and the powerful energy of the place. We met Alba, our friend from the TTC course, who had finally met her boyfriend Zac and were on their way to Nepal. With them we tried some of the recommended cafes and restaurants of Kashi (new way of calling Varanasi) like the Brown Bread Bakery (breakfast) and Fuji or The Dolphin (dinner). All with very nice location but quite expensive for what you get (mainly The Dolphin), which shows the damaging effect of guidebooks for customers. Most of the places we visited were listed in Lonely Planet or the Rough Guide and while we normally find their advise quite helpful, the prices were often (but not always, ok?) higher than quoted in the books.

Because of our ongoing delicate stomachs, quite often we ate non-indian food (momos, I loooove momos, nepalese version of dim sums; pizza once… not a great experience; western style brunches with porridge, muesli or omellettes and even japanese). Aum Cafe, became a regular choice and Neru was unfortunately a late discovery. Blue Lassi was simply great. The guys there prepare the large variety of lassis fresh at the entrance of the tiny blue-painted shop, where the visitors pack, waiting for their chosen delicacies . The waiting is well worthy (don’t need to go for exotic stuff, the banana lassi is AMAZING and costs 40 of 50 IRP) and the pop music (“Sunny, sunny” the hit of the moment) and friendliness of the staff is just fantastic. They even have internet, and we had a surreal situation when we showed Heidi (Bea’s sister) the place over skype and she saw people carrying a corpse towards the river…

The Ganges, the beating heart of Varanasi. Whatever you heard about this river is true. No matter how good or how bad. It will swallow everything (corpses, furniture, heavy metals from the factories up river…) and will emerge strong and powerful (and a bit radioactive, if you ask me). It is the holiest of rivers, where people bath defying the laws of nature (and the rules of Health and Safety). If you die here, you are cremated and thrown to the Ganges and it is said that if you die in Varanasi you are automatically enlightened, which means that more and more people come to die in this place!! It is the alpha and the omega, where it all starts and ends.

And like this we finish this posting. This place was simply amazing and we could talk for hours about our experiences but it would simply be too long so we let you guys with a compilation of pics. Hope you enjoy them and remember to send us your comments and thoughts about the pics, the place or anything in your minds. We know we have taken a very long time to do this posting but hopefully we will give you some updated news very soon.

Oh, just click on the first one and you should get a slideshow with some comments!!! 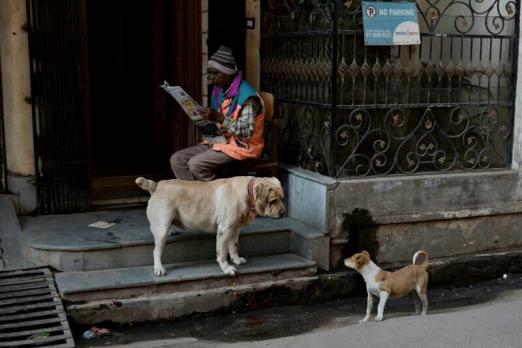 This is for you Lu. Some friends for your little baby 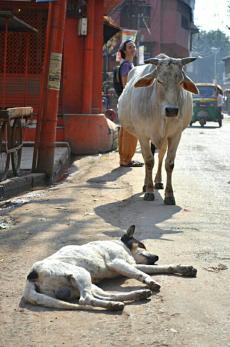 Are you sure you want to stop for a nap right there?

Colourful, sunny… nice! But attention, see the nets at the back? The whole terrace is cover to prevent the monkeys from attacking the customers and stealing the food!

The reality of food. Not that I was expecting animals to be kept in organic farms, but this was a bit of a shock. And the explanation from the owner as wel: “Do you want a chicken for dinner, just pick the one you want. They will behead it, “clean” it and put it in a bag for you. And if you want they will even cook it there”.

Dinner with Alba and Zac at Fuji restaurant

I really did not know how to name this picture. I saw the puppies and they were so sweet I had to take a picture of them and all of a sudden this lady appeared and I took it in the picture. Only later I realised her skin problem. I don’t know exactly what it is but it is more common than I could imagine and we have seen it a few times.

Why putting rubbish bins when you have animals that can deal with it? I think the one on the right just went to pick up the salt and pepper…

Two men separating with tiny brushes the threads of silk to prepare a saari… In the middle of a public park, with tons of children playing cricket! Good luck with that!!

The stones on that big pile at the centre of the pic have to be smashed into little pieces and put into those white bags… by hand! Two to three women work daily doing just this and everyday men bring more big stones

Family flying a kite at sunset. View from the roof of our hotel. The sky was full of them but unfortunately I am not such a good photographer. Lucky they were playing on a roof close to ours!!

Japanese group (of course!!) catching the perfect sunrise. I could not because I had them in front of me… They paid more to their taxi boat, but I like this pic!

Boats anchored next to the Main Ghat and people approaching the river for the morning prayers.

Believers bathing in the Ganges as the sun rises

Hotels and particulars bring their garments to cleaners to have them washed. Well, guess where are they washed? By the way, greetings to Rachel, the lady with the red jacket! We met her at Aum Cafe and spoke for a while (she is going to New Zealand, like us) and later on realised we had taken a picture with her in it! Destiny?

This is one of the two ghats where people bring their dead relatives for cremation. See the pieces of wood at the back, the black monk on the left… and the cleaners washing the garments next to loads of rubbish!!! 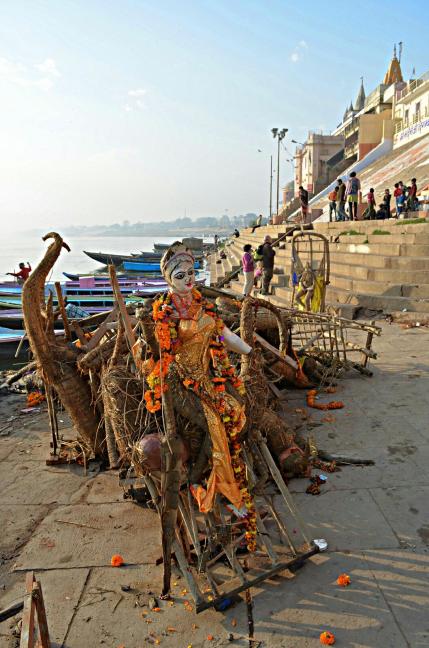 This is one of the many gods we saw during these days. Apparently, it was a holy festival and at this time, people gather and pray to their gods for a few days and at the end sink them in the river. 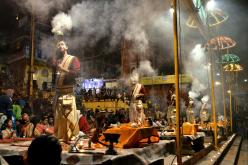 The daily evening retual at sunset. There are many in the ghats but this is the most popular one

Soldiers ensuring the security of the temples. We can see them coordinating their actions with their mobiles…

Sorry mate, I think the barber went for a chai. Just wait there a bit, he should not take long!

Hey, the barber is back! Where did the other customer go?

Cables everywhere! This picture is dedicated to my brothers Jesus and Dori, who deal with similar problems in a daily basis! 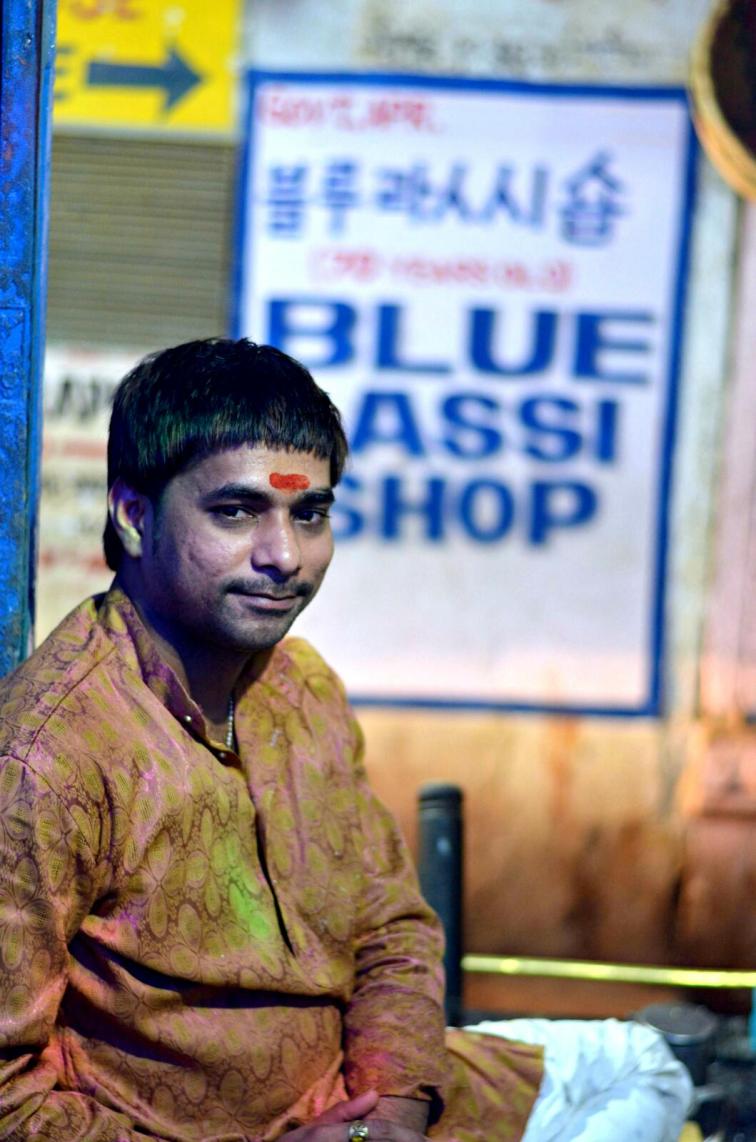 One thought on “Varanasi”